For me, October means the beginning of autumn, pumpkins, coffee, delicious food, and orange, yellow and brown leaves and colors.

Of course, here in my ranch, a good city, autumn does not exist, we go straight from the heat to the cold.

But hey, that doesn’t stop me from making food and drinks with an autumnal touch.

I was inspired to make this drink by the pumpkin spice latte but instead of making it warm, I decided to make it in a frappe version because as I write this entry at 6:55 pm the thermometer reads 31°C so I don’t want anything hot.

It is very easy to prepare, the only thing is that you have to let the coffee cool and make coffee ice.

This is done so as not to make the frappe too watery, instead of adding ice, coffee ice is added.

When the ice cubes are ready, they are only placed in the blender with almond milk or your favorite, pumpkin puree, liquid stevia or sweetener to your liking, ground cinnamon, ground ginger, ground cloves, and vanilla extract.

Blend until everything is well incorporated and it depends on your mood, you can eat it like this or cover it with a bit of whipped cream, to feel that you are in the cafecito, but best of all, you are in the comfort of your home and you hardly paid nothing for the coffee

I added a pinch of xanthan gum, this helps to emulsify and the coffee does not separate so quickly.

Of course, this is optional and nothing happens if you don’t have it, I added it because I use it for gluten-free cooking, and take advantage of it since it gave me a lot more time to take photos of the coffee without the liquid from the frappe separating.

If you don’t have it, nothing happens. I leave you the recipe. 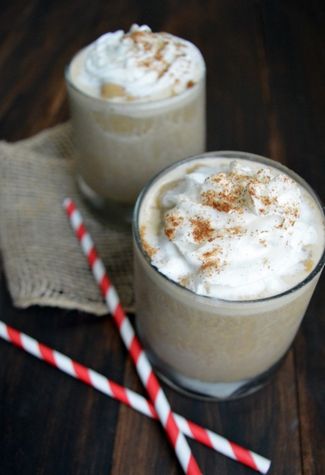